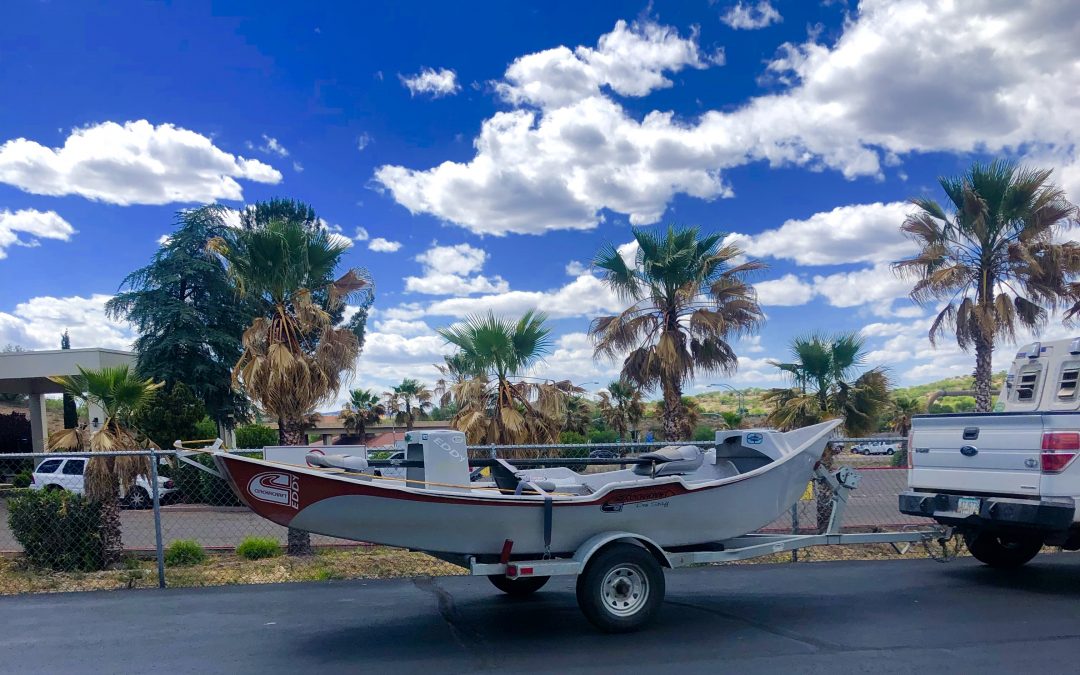 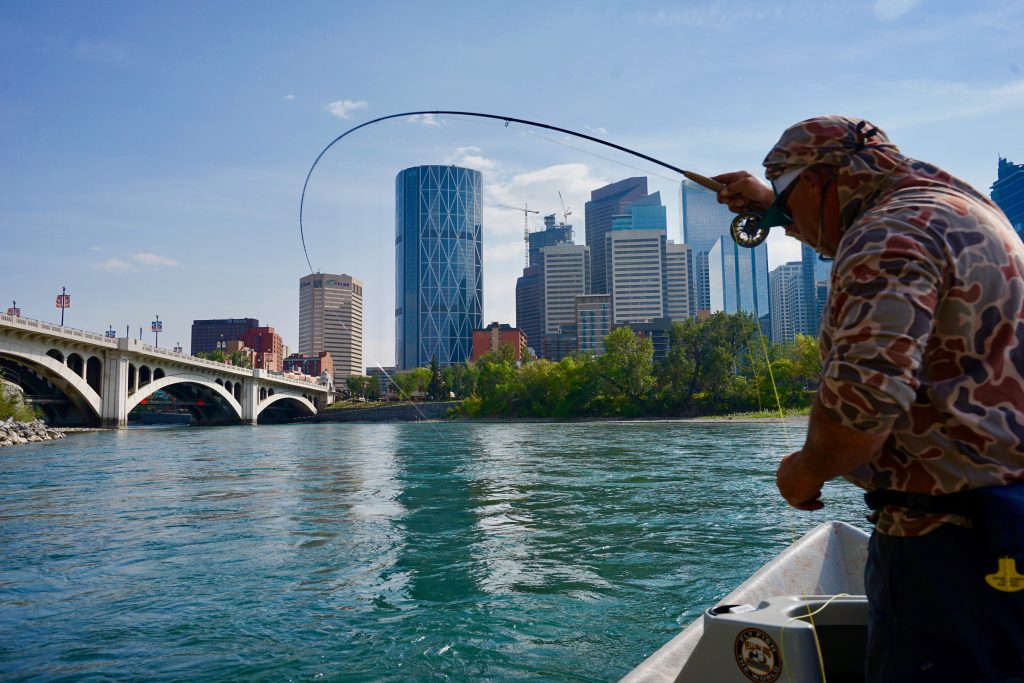 Let’s face it this Corona Virus has placed the World on “pause” until further notice.Fishing Trips requiring flying are being postponed or canceled severely impacting the Fy-Fishing Industry especially Destination Guides, Oufitters and Lodges as no one wants to risk travel and you cant blame them.I had high hopes of traveling north to Ontario to help a friend out with his Guide Service focusing on Great Lakes Steelhead,that would be a kick I thought but now the U.S. -Canada Border is closed. 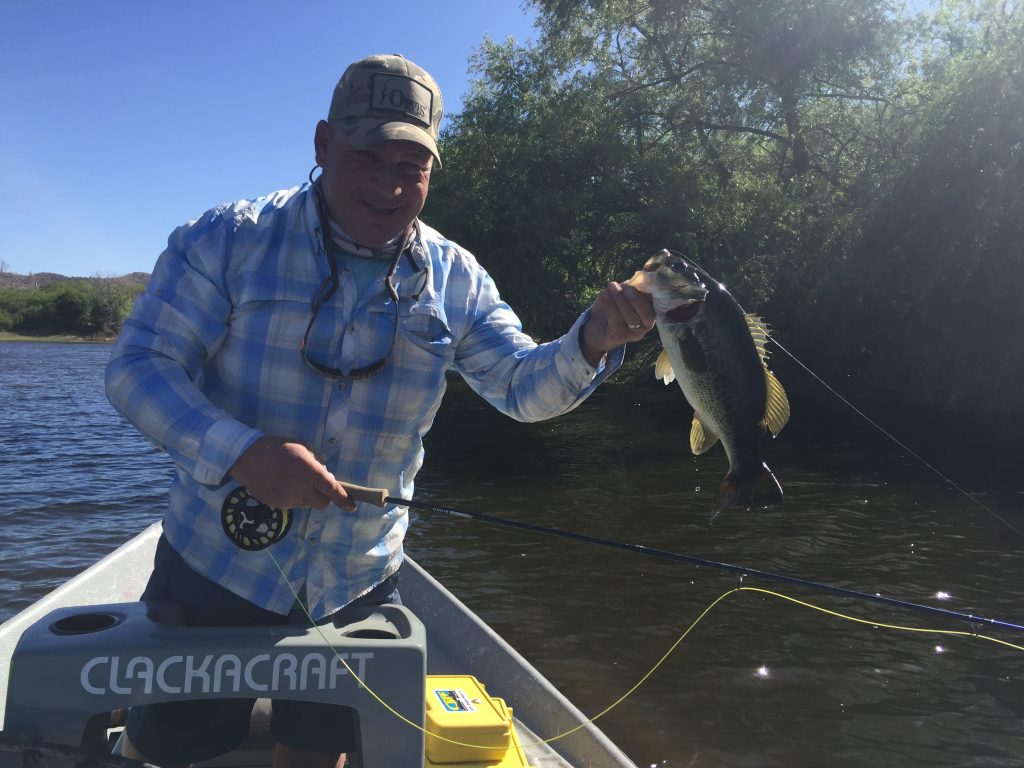 So much for that great idea.A case of “Cabin Fever” has also set in and I am thinking I may have to continue to lay low and perhaps squash my guide season  in Montana and Alberta which would result in me staying right here in Patagonia Arizona which for all intensive purposes is not the Fly-Fishing Capitol of the World.If that scenario becomes reality Ill miss my northern fishing season however the main thing is stay healthy and limit contact with People. 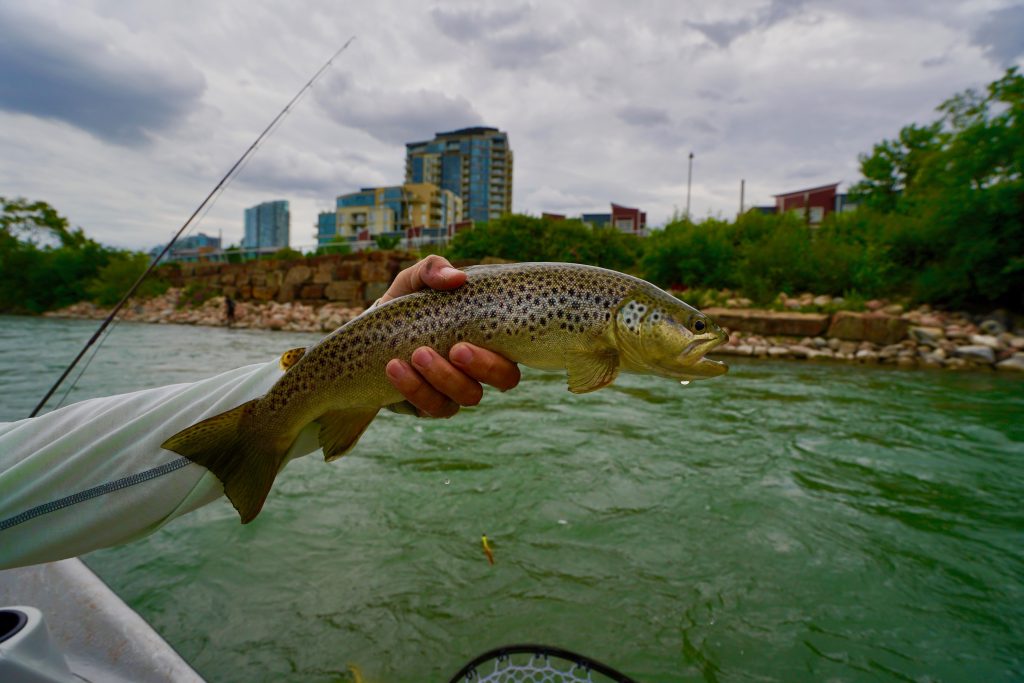 Hopefully this situation that we are in sorts itself out sooner than later, but in the mean time I plan on fishing local.Checking out different Bass Lakes and perhaps some Small Arizona Trout Streams,places I have never been before but wanted to go.I’m sure a lot of you are having the same thoughts and want to make the best of a crappy situation. 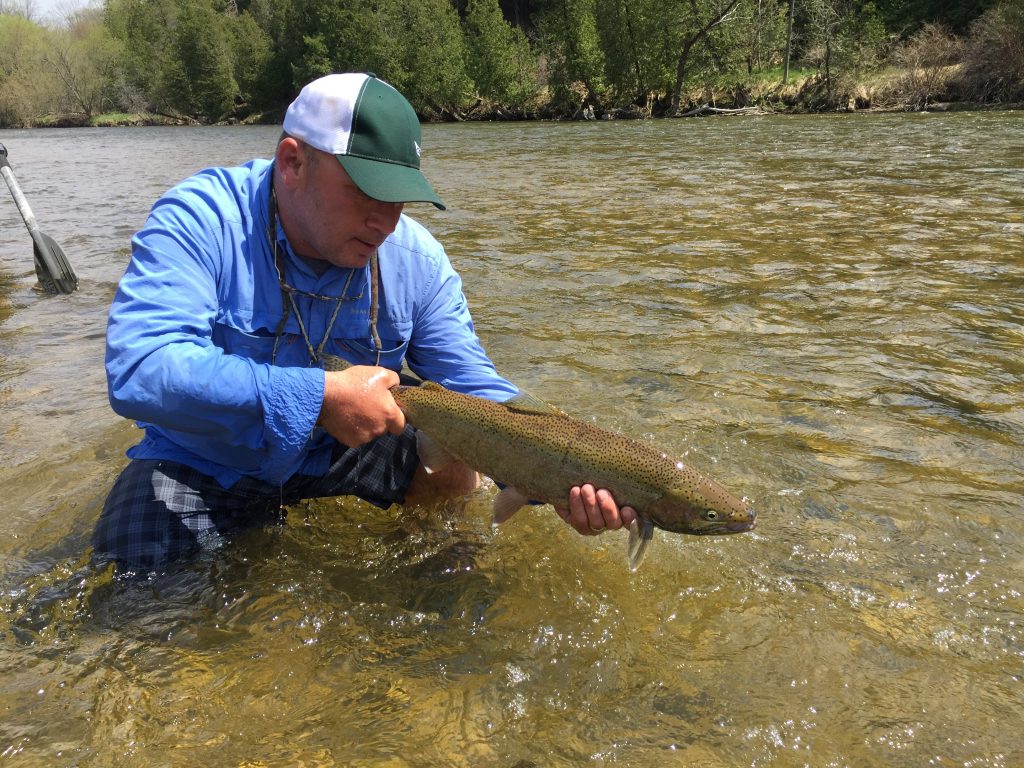 If you live in the east or Midwest perhaps its time you checked out that Smallmouth Bass River you have heard about but never fished,or that little creek that via the rumor network you heard holds Brook Trout the further up you go.East Coasters have a myriad of Salt Water opportunities and if you live close to the Great Lakes their Tribs offer shots at some decent migratory rainbow and brown trout plus various Salmon Species.Farm Ponds stocked with Bass or Panfish can be a hoot ,sure its not Rocky Mountain Trout fishing but all this could be close to your home.Speaking of which, if you live in the West generally you don’t have to go far to find a Trout Stream,maybe this is the year you get into fly-fishing Alpine Lakes or getting off the Tailwaters and fishing back country streams for Cuttys. 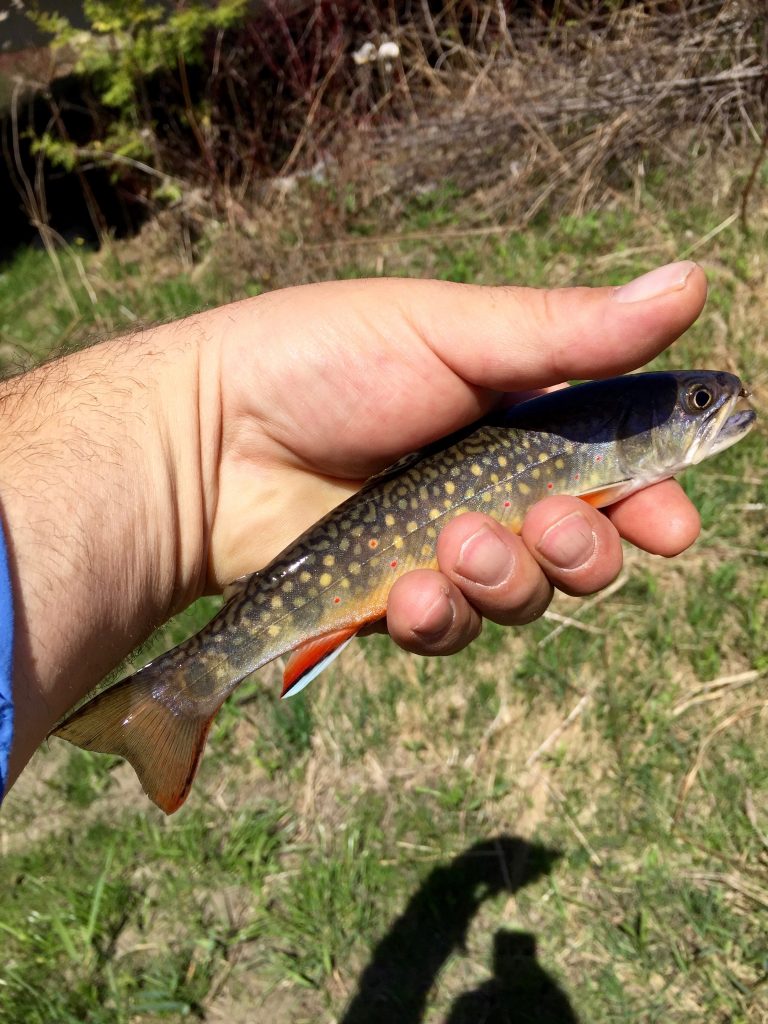 Of course all of the above might require some tackle and Fly purchases and rather than order everything online give your friendly neighborhood Fly-Shop a call,Im sure they would love to hear from you and need the business.A suggestion to limit your contact with fly-shop staff would be to order your flies, leaders and hopefully that new rod and reel over the phone and have everything ready to roll for pick up or maybe delivery. 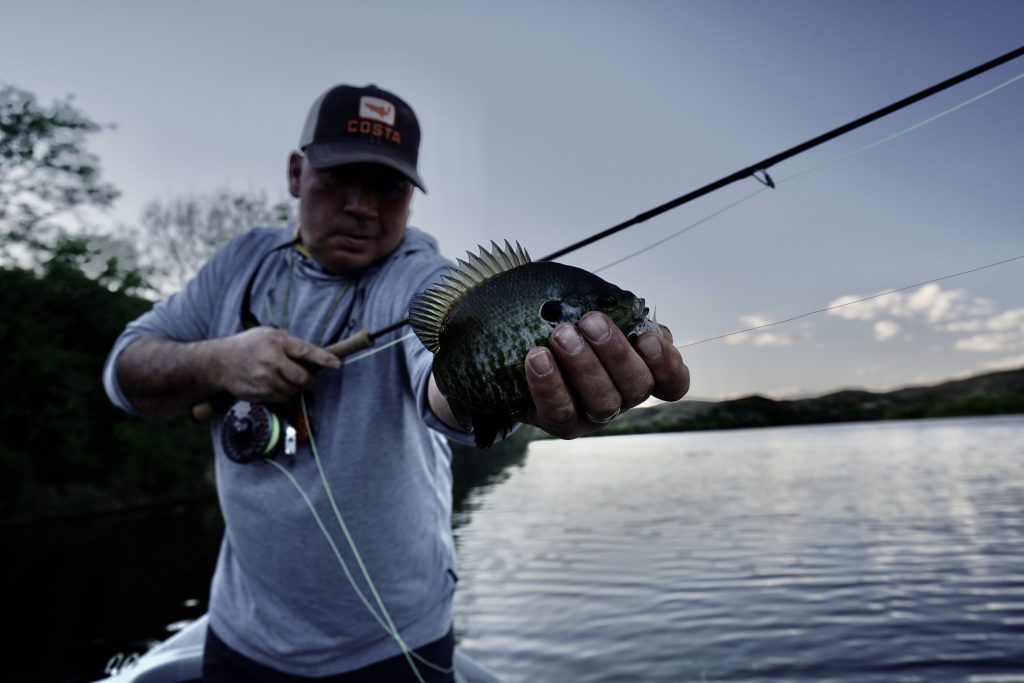 Panfish can be a riot on light tackle

The people that are really going to hurt while this pandemic carries on are Guides.If you enjoy fishing  with a local guide why not give him or her a call and see how they are doing ? Question them on what they have been doing to prevent the spread of this virus, most I’m sure have been laying low tying flies or fishing solo.If you are comfortable with their precautions and they are with yours perhaps book a trip.A few Caveats to add would be you would take your own vehicle and follow the guide, if you are floating have your rig shuttled also.I would suggest  providing your own lunch and drinks, finally consider tying your own flies on your tippet.This would give you a chance to get out with a Pro,help a fellow Human out while at the same time ensuring social distance is maintained. 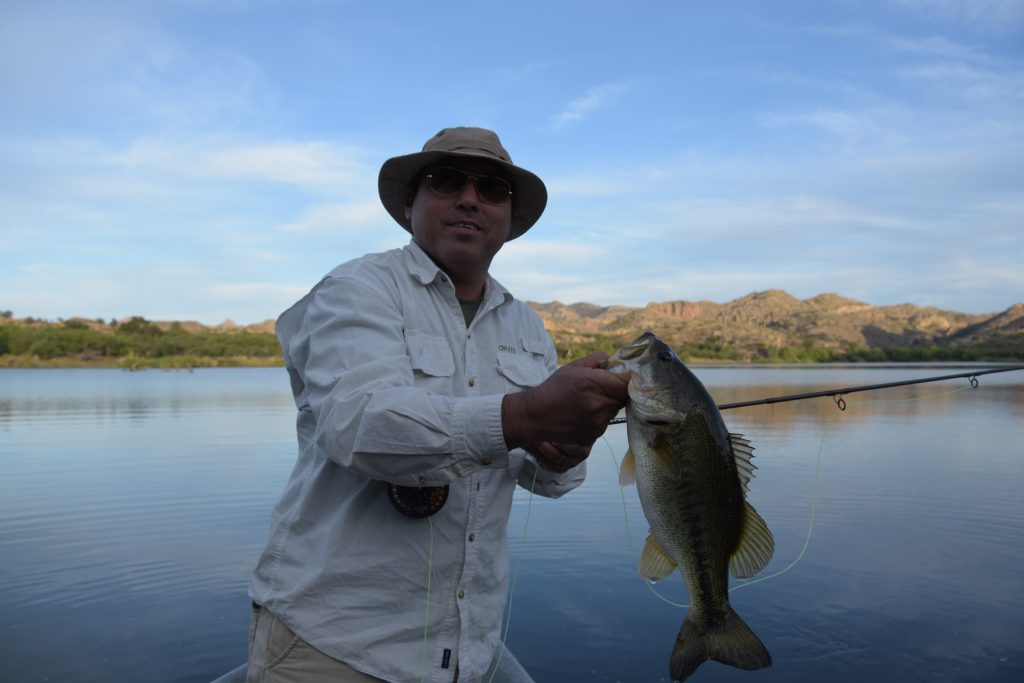 At the end of the day we will all get through this.Of course taking the necessary precautions to prevent the spread of and catching the Corona Virus is on everyone’s mind.However you still need to go fishing and I’m hoping these suggestions help.Stay Healthy and Safe Amigos ! 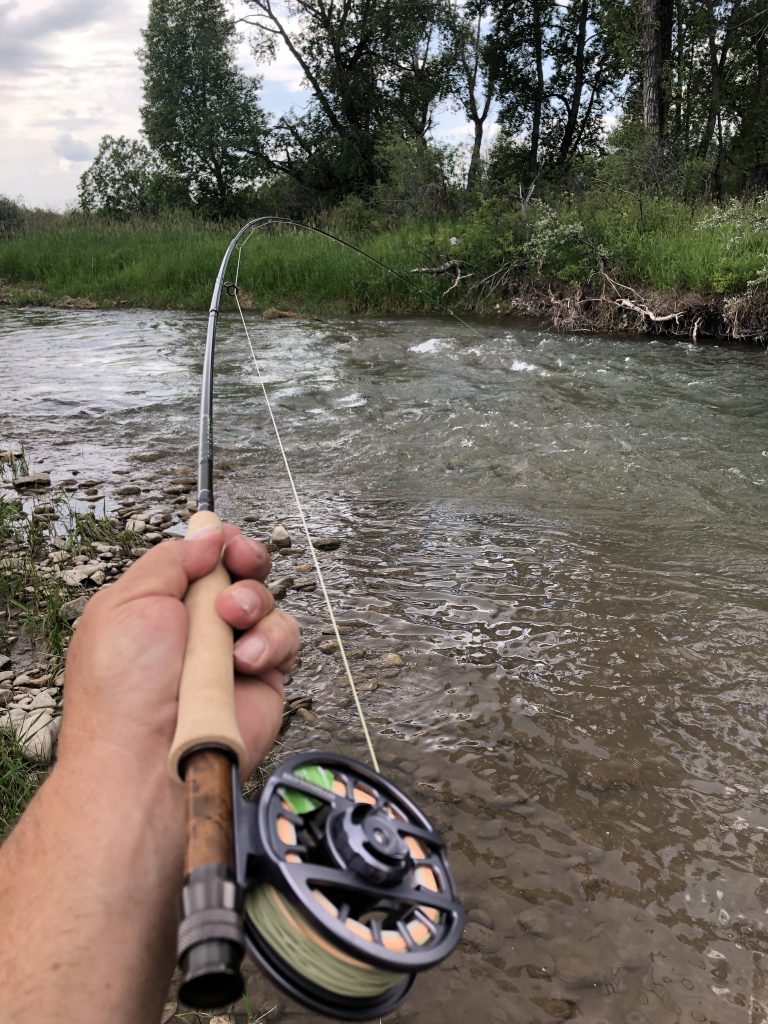 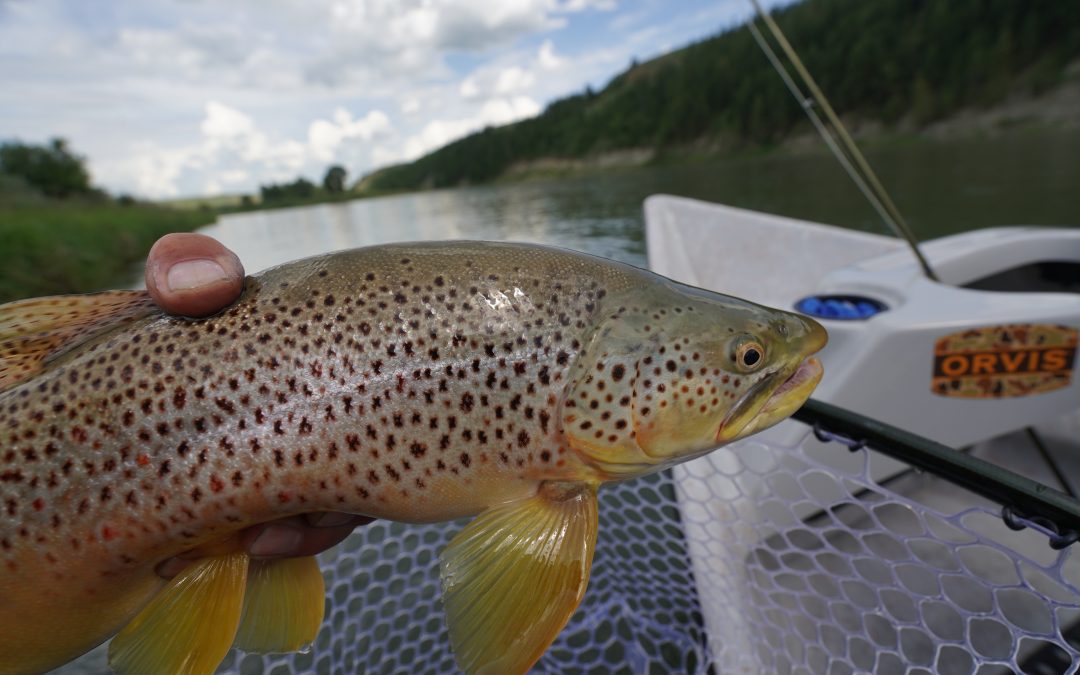 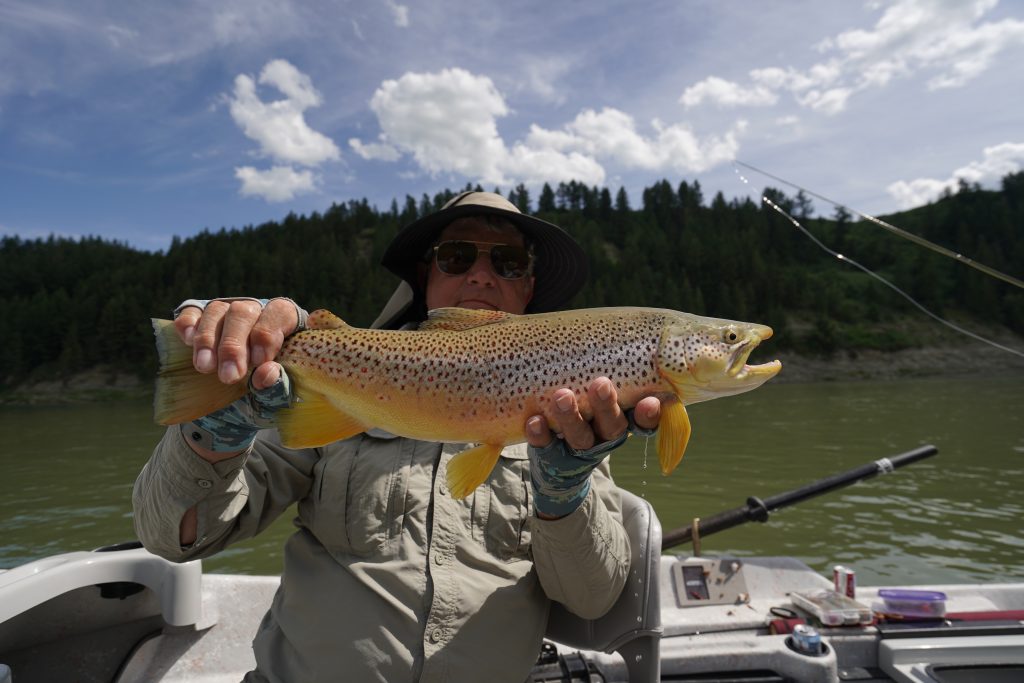 Snowpack is slightly above average in The Northern and Canadian Rockies.This means that conditions should be awesome by the first week of July.We suggest not booking until after that.With High water comes great flows throughout the season.Last Season August was a top month and there is no reason why we won’t have a repeat performance of that.READ OUR CURRENT TERMS AND CONDITIONS.

From Late April thru to Runoff (late May) can be an excellent time to fish the Bow River and other Southern Alberta Rivers.Let us know and wee will get you booked in. 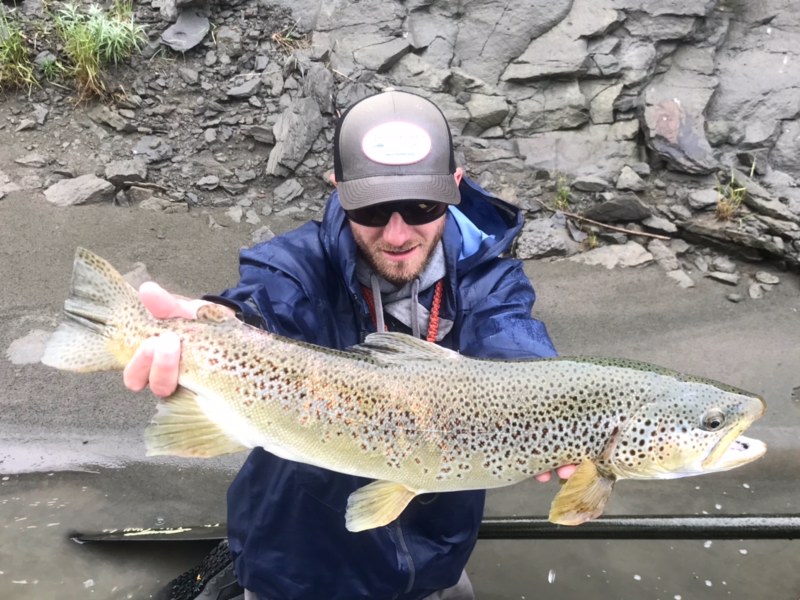 Our 2020 Season is booking up and we are excited to have the Same Guide Team(s) in both Alberta and British Columbia.For July,August and September Regular Season action our Top River picks are below.

The Missouri River generally fishes great from mid May well into October.The timeframe that we target is mid May to September.The Missouri River will have excellent  flows throughout the season and late July &  August will be good.Working with a number of Montana Outfitters we are able to make fishing on this excellent river happen! 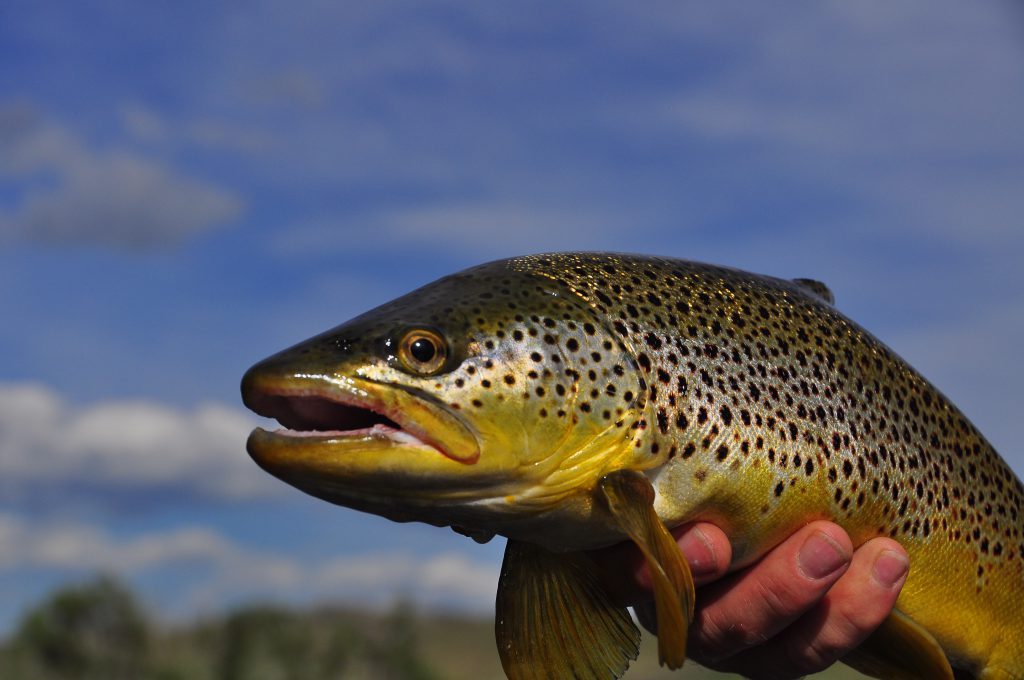 Form the first week  of July thru into October.The Bow River which is flows thru Calgary Alberta and is an easy  quick Trout fix.If you like big browns and rainbows this is it.With Direct flights from most major US Cities this is an easy trip to put together and requires no rental vehicle.With the current flows we are sure this is going to be great.Have a look at this great Bow River 4 night 3 day fishing Package 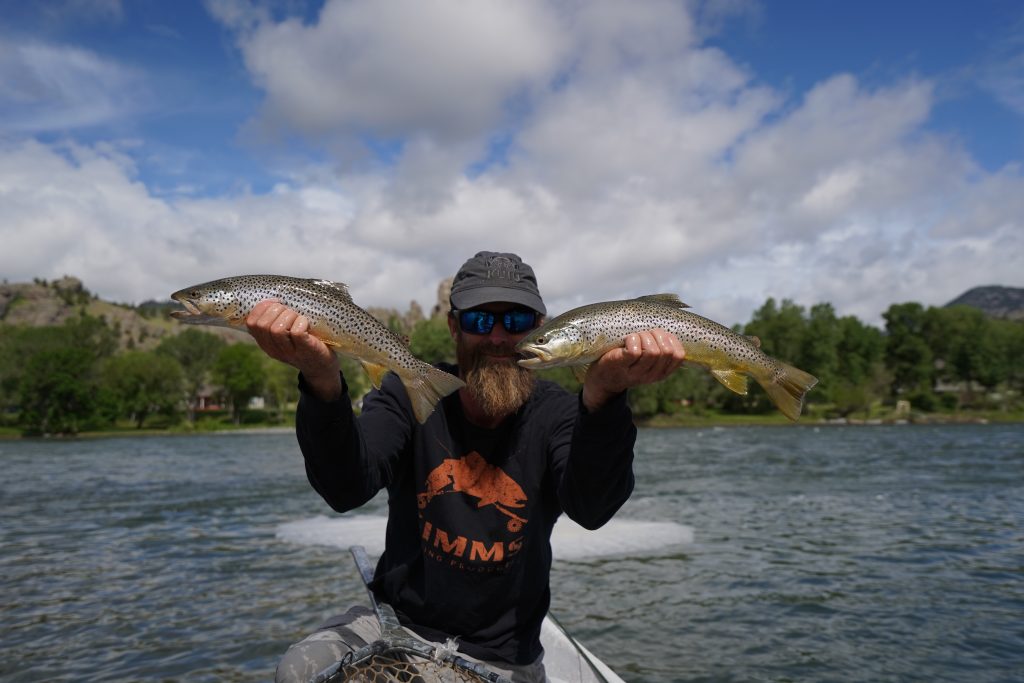 The Waterton River -Located in Extreme S.W. Alberta this is a good to very good Brown Trout River.Its floatable in early July then as it drops  it is an excellent walk and Wade option for large Brown Trout. 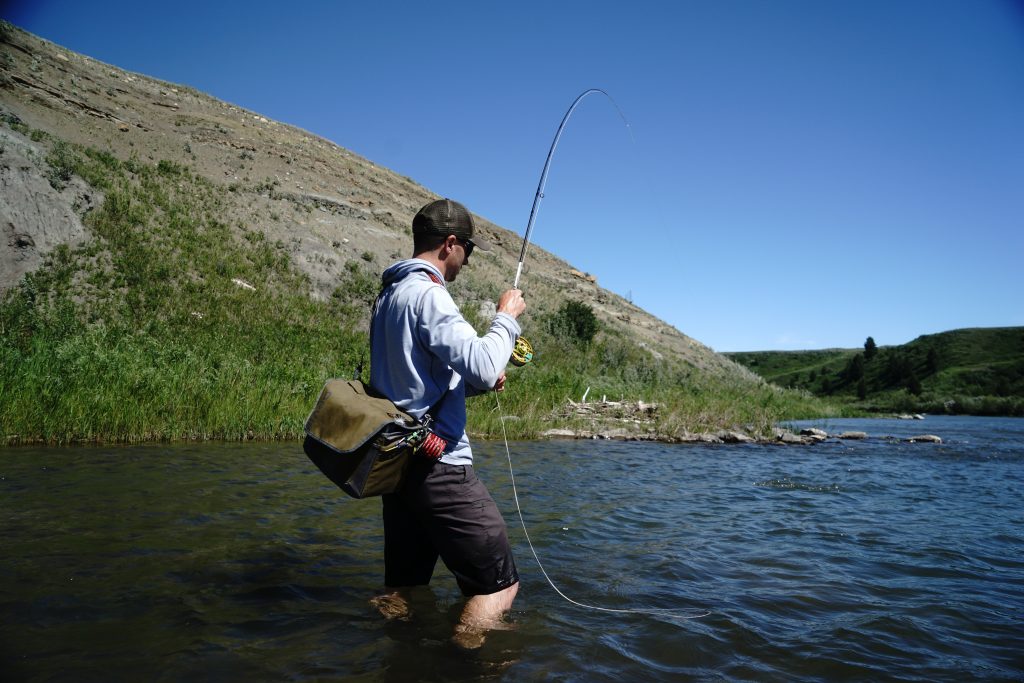 The Oldman River -Located in S.W. Alberta this river has many ‘faces” ranging from Alpine Cutthroat fishing to a medium sized Tailwater Float trip.

The Elk River in and around Fernie B.C. should be primo throughout July, August and into September. 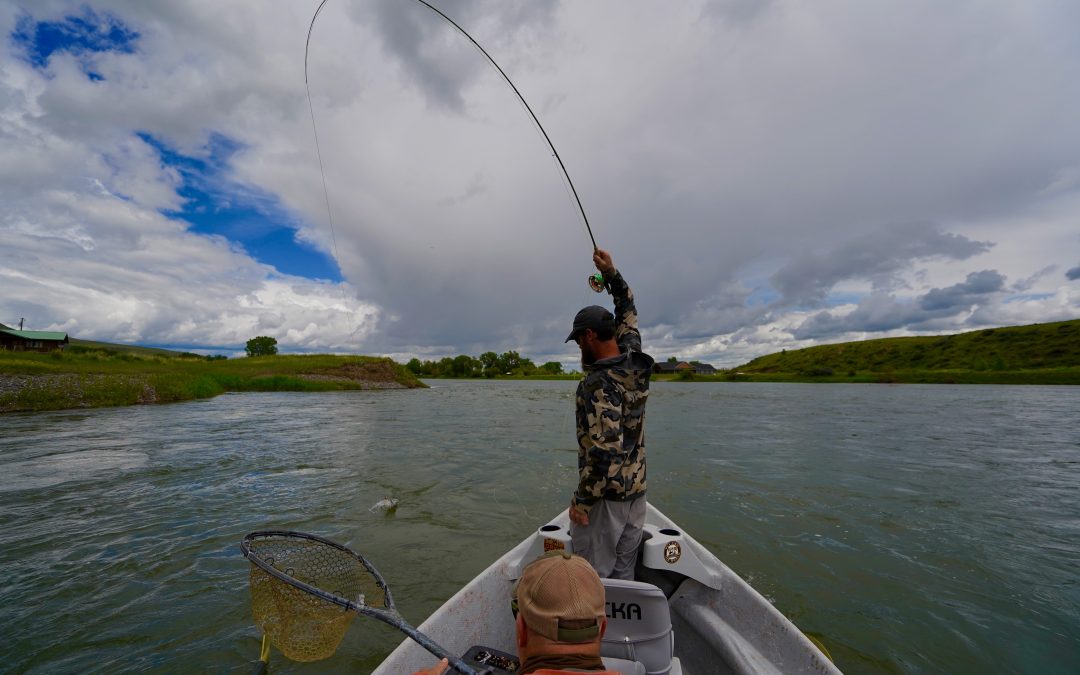 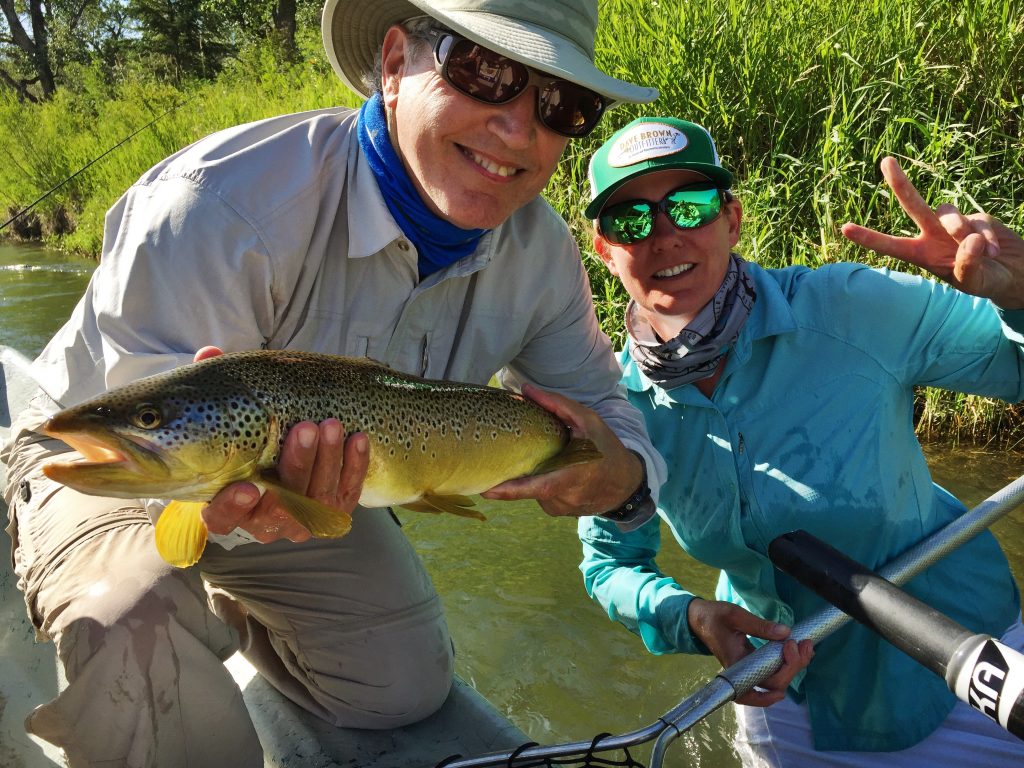 Happy Client with a Bow River Brown Trout and D.B.O. Guide Angela Rankin with the net

As our 2019 Season Fly-Fishing Season Ends we are excited about what lays ahead in 2020.We will be active on Montana’s Missouri River starting In May of 2020 along with our regular operations in Southern Alberta ,namely the 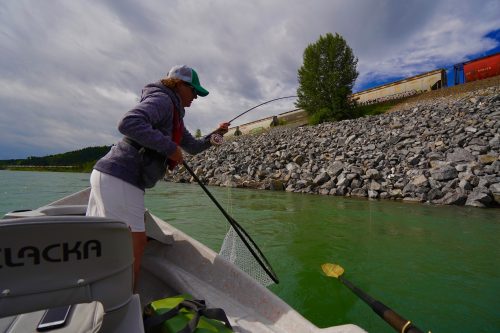 and S.W.Alberta.Andres will be looking after the B.C. Operation allowing us to be more focused in Montana and Alberta. 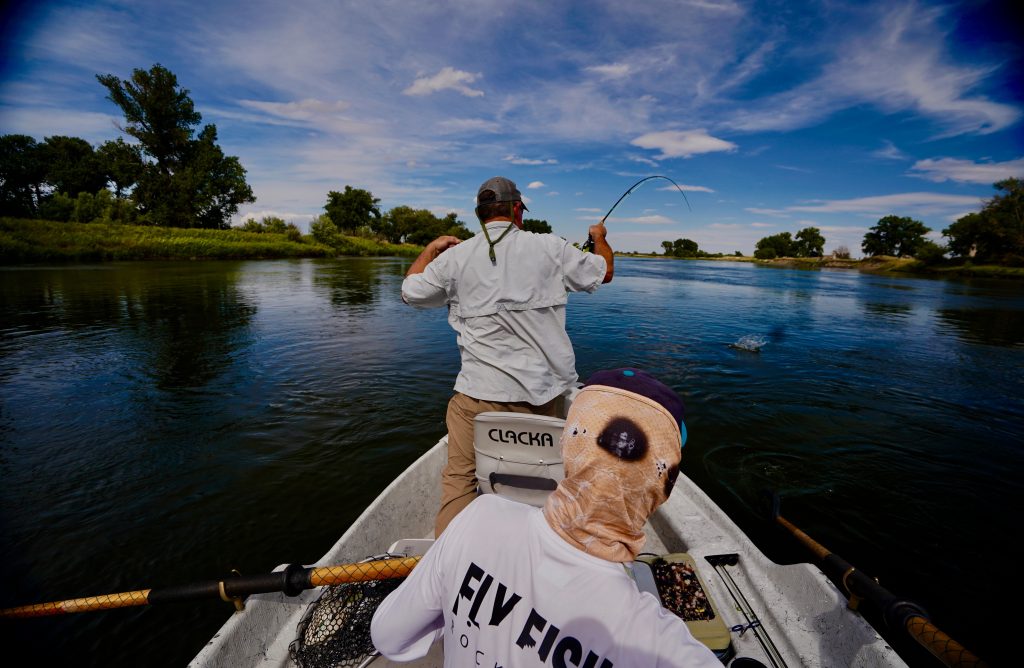 We are working on some stellar lodging options in both areas so stay tuned as our vision unfolds! 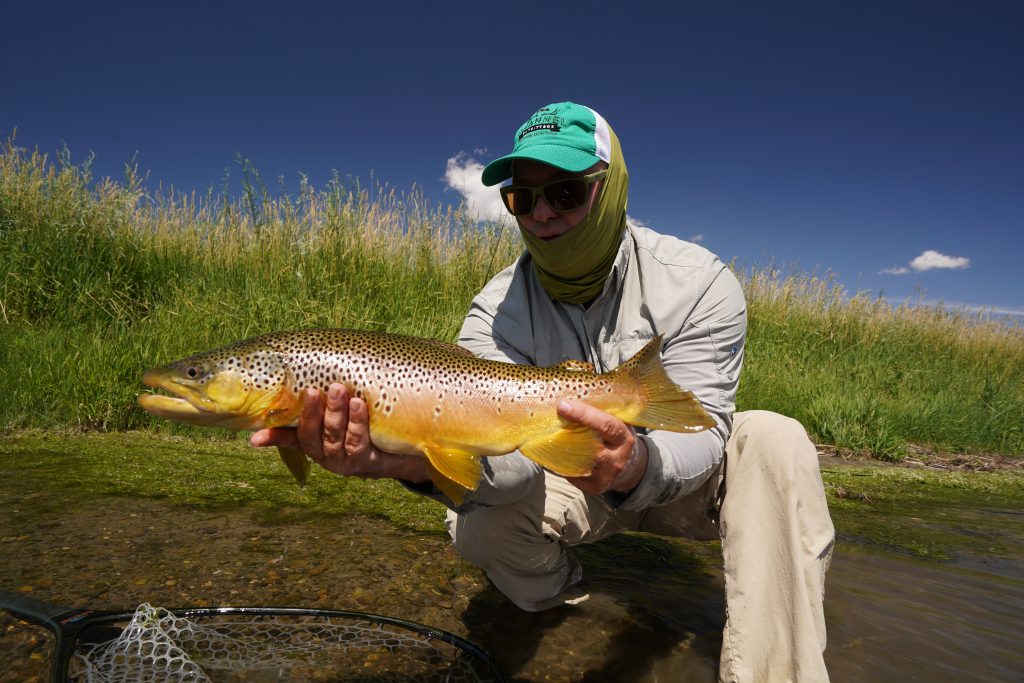 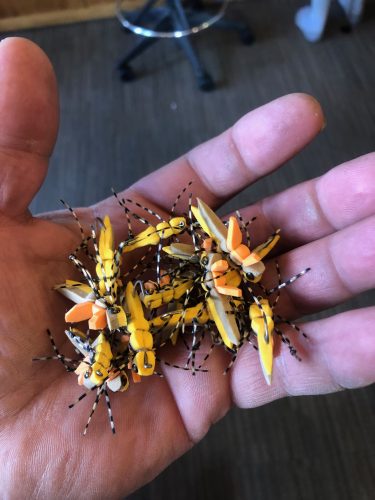 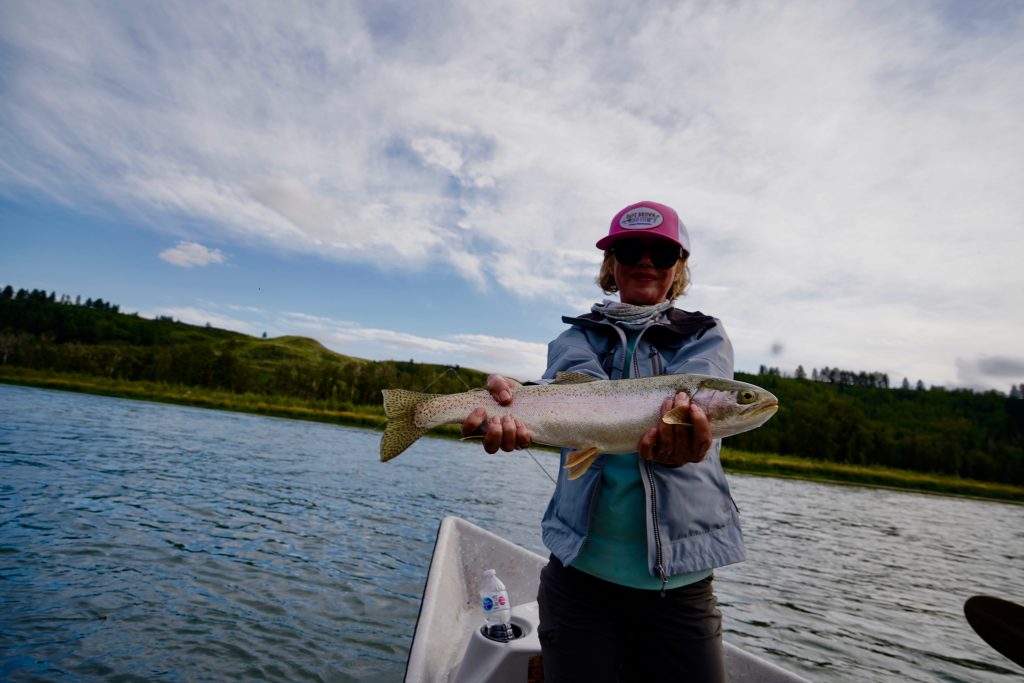 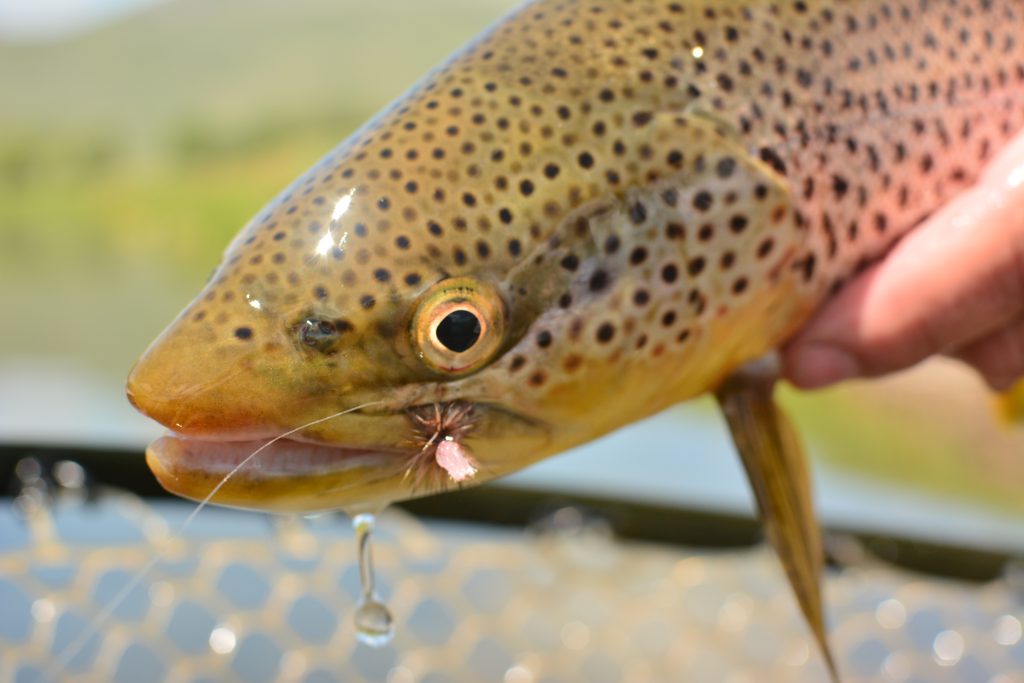 A little warm up for things to come ! #bluegills #

“Millie” and her pose for the camera #sonya7ii

Since 1988 Dave Brown has guided fly fishermen on southeastern British Columbia’s and southwestern Alberta’s renowned rivers, such as the Elk, Bow and Crowsnest. During the falls he has pursued his other passion-wingshooting over pointing dogs-and has spent a considerable amount of time hunting Western Canada and the U.S. Dave soon realized that the upland hunting in and around his previous Canadian home was pretty special, with few hunters and lots of birds, especially Huns and Sharptails. With other outfitters advertising upland hunts in conjunction with Waterfowl shoots, Dave realized that no one was offering what true upland bird hunters really want: walk-up hunts over pointing dogs. Subsequently, Dave has become the first outfitter to employ pointing dogs in The Provinces of Alberta and Saskatchewan. In 2005 Dave met his Wife Lisa while Quail Hunting In Patagonia Arizona Dave emigrated to the United States and together they formed Dave Brown Outfitters U.S.A. L.L.C which act as an agent for Dave’s Canadian Operation which includes Guided Fly-fishing trips throughout S.E. British Columbia and Southern Alberta, The US Company also represents Dave’s Running Hun Lodge located in S.W. Saskatchewan which has fast become a “mecca” for serious Hun, Sharptail and Waterfowl Hunters.

Dave also was instrumental in developing a cast & blast program in which clients would target large, pre-spawn Bow River Brown Trout for several days and then head out onto the prairies to hunt game birds. The program has been very successful. He has has spent considerable time pursuing or game birds in different areas outside of his normal realm, such as Chukar and Valley Quail in British Columbia and since 2000 Dave and his Dogs have spent every season hunting Bobwhite Quail in Oklahoma. Now he and his dogs are busy throughout the winter months conducting guided Quail hunts throughout Arizona. During the off season Dave is busy training dogs, tying flies, attending Sportsman’s shows, fly-fishing for Bass and searching for more wing shooting venues.

At the end of the day Dave prides himself on being an Outfitter’s Outfitter and a Guide’s Guide, he is a “hands on” Operator, his enthusiasm, experience and knowledge of Fly-fishing and Wing-shooting are second to none, no other Outfitter or Guide in North America can offer such a variety of Outdoor Pursuits over such a vast area and run it as a viable business yet still have fun.

Dave gives thanks and credit to Ben O. Williams for his constant tutelage, especially with dog training.

Guide Team
People are the most important part of any organization, and it is know different at D.B.O as we take great pride in the people that work with us

Dave Brown — Outfitter and Guide
Darcy Richardson Head Guide and Water Fowl Coordinator Besides being an avid hunter, Darcy brings a lot of experience to the D.B.O. team as for several seasons he worked at a Waterfowling lodge in Northern Alberta and as a Fly fishing Guide in South Western Alberta and South Eastern British Columbia

Quinn Styles
Quinn has worked with D.B.O since 1992 as a Fly-Fishing Guide and in the fall as an Upland Guide. Quinn has Three English Setters and a Chesapeake Bay retriever. Quinn will be heading up our Alberta operations this year.

A little warm up for things to come ! #bluegills #

“Millie” and her pose for the camera #sonya7ii