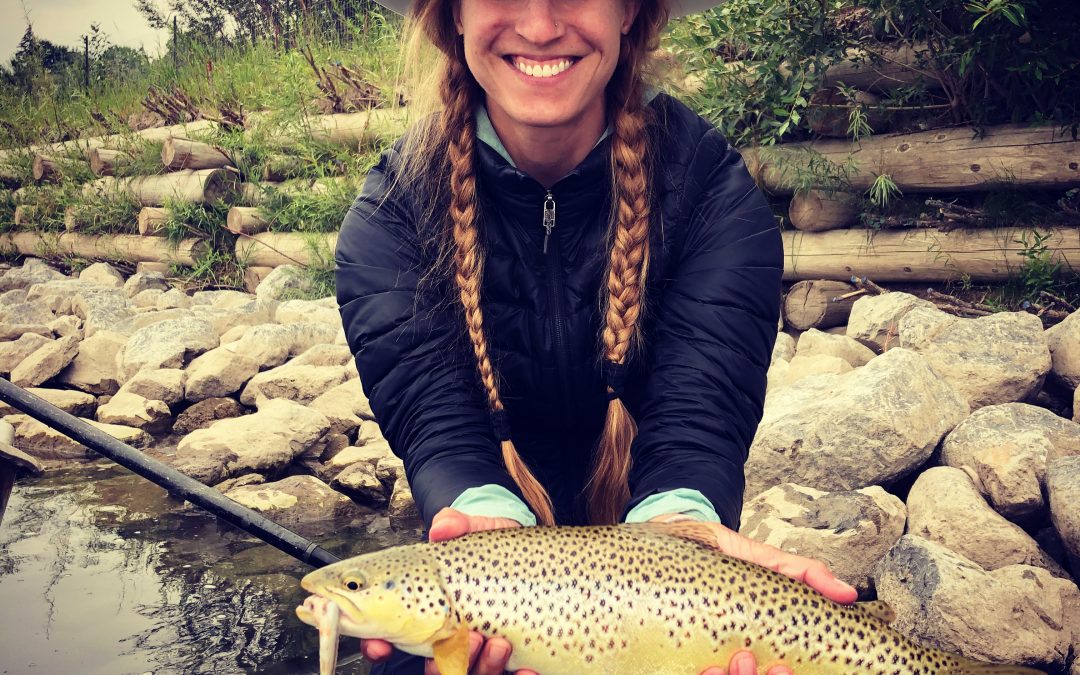 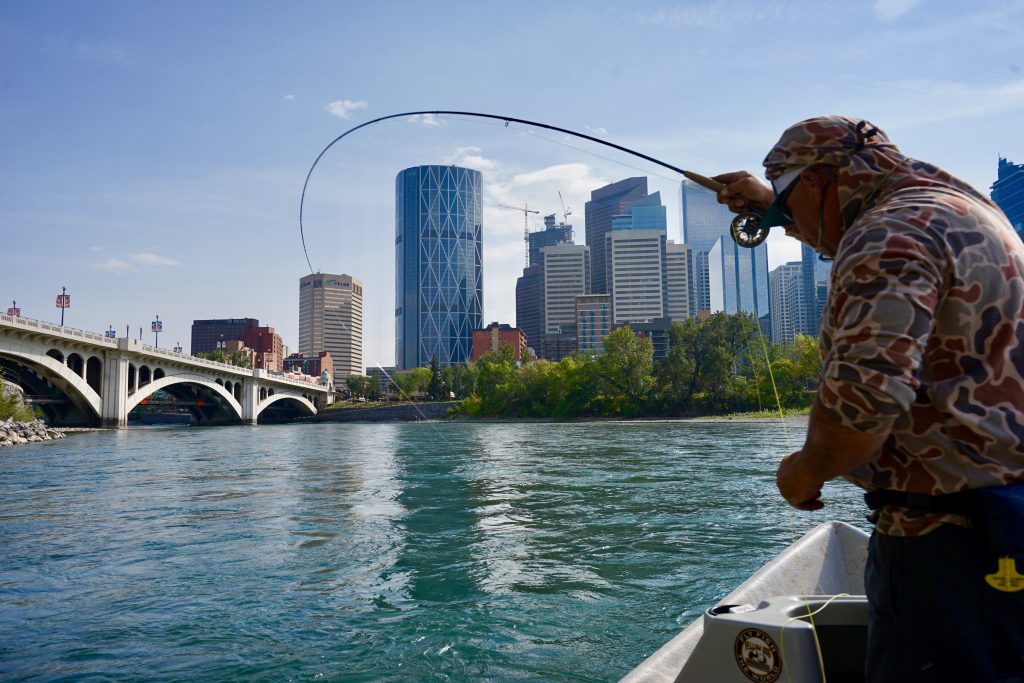 From a Calgary Fly-Fishing perspective the relationship between The Bow River and The City is extremely unique.The “famous” stretch of the Bow River referred to as The “lower” Bow River is where the action is.Depending on who you talk to  this section starts  at Fish Creek Provincial Park while some Calgary Fly-Fishers may contend that it starts just above the Calf Robe Bridge where the Bonny Brook Sewage Treatment Plant pumps  treated affluent into the river.This nutrient load is the reason why the Lower Bow River has a large biomass aiding in the obscene growth rate Bow River Trout are famous for.It’s also at Fish Creek Park where The Bow River begins to leave the urban sprawl of Calgary behind as menders through farm and ranch land, heading east to join the Oldman River where together they  form The South Saskatchewan River eventually flowing into Hudson’s Bay. 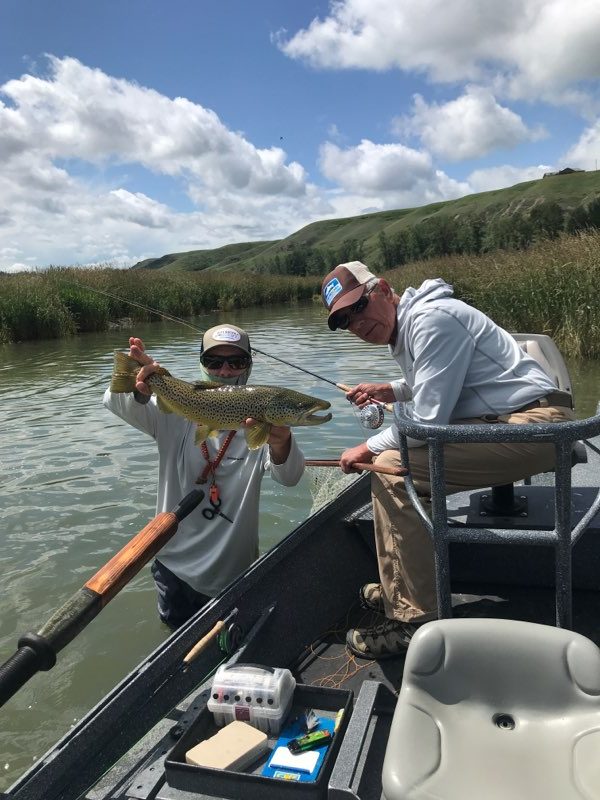 The 50 mile Lower Bow River setting is picture perfect for what Fly-Fishers from around the World seek,Serenity,wildlife,and large wild Trout.Guides and DIY Anglers for the most part stick to the lower Bow because the trout population seems to be more equally balanced between sometimes moody browns and easier to catch rainbows.Although anecdotal most anglers would agree the further up The Bow River you fish Brown Trout tend to dominate making for some slow days if the bite is not on.There is also the aesthetics of Fly-fishing through a city of million people,but when it’s on The Fly-fishing for large Brown Trout can be lights out. 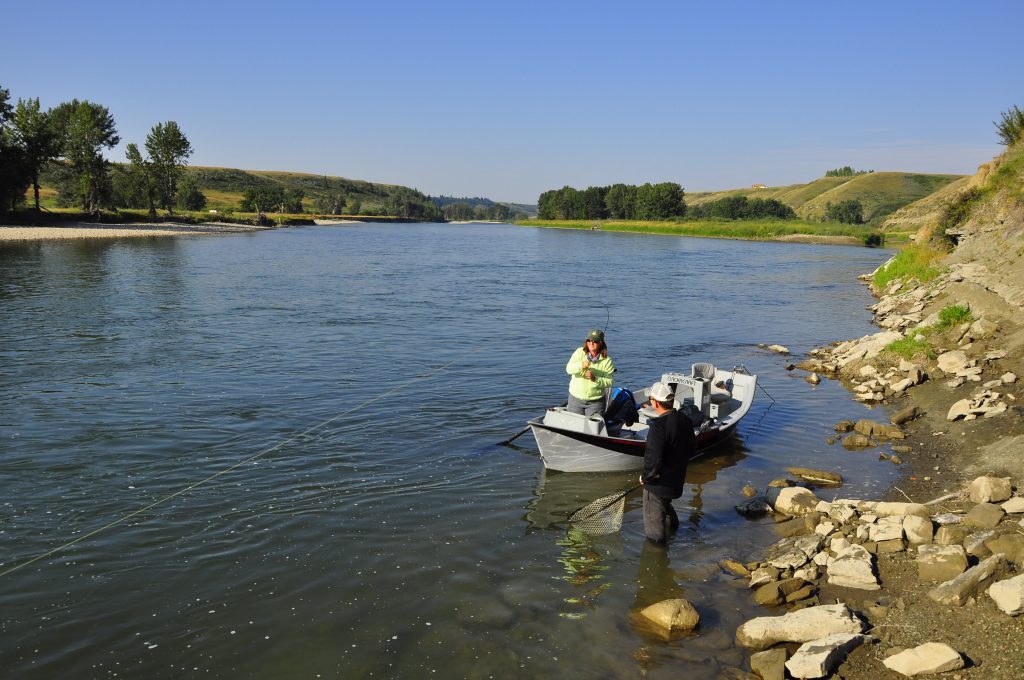 Until recently the “City Stretch” above The Glenmore Trail Bridge was for the most part untouched from Drift Boat Anglers,however due to some forward thinking City Planners The Harvey Passage was created allowing floaters to bypass the Western Irrigation Dam at the same time Bow River User Groups petitioned the City to start opening up more access for launching boats.The result has been beneficial to both Anglers and Trout. 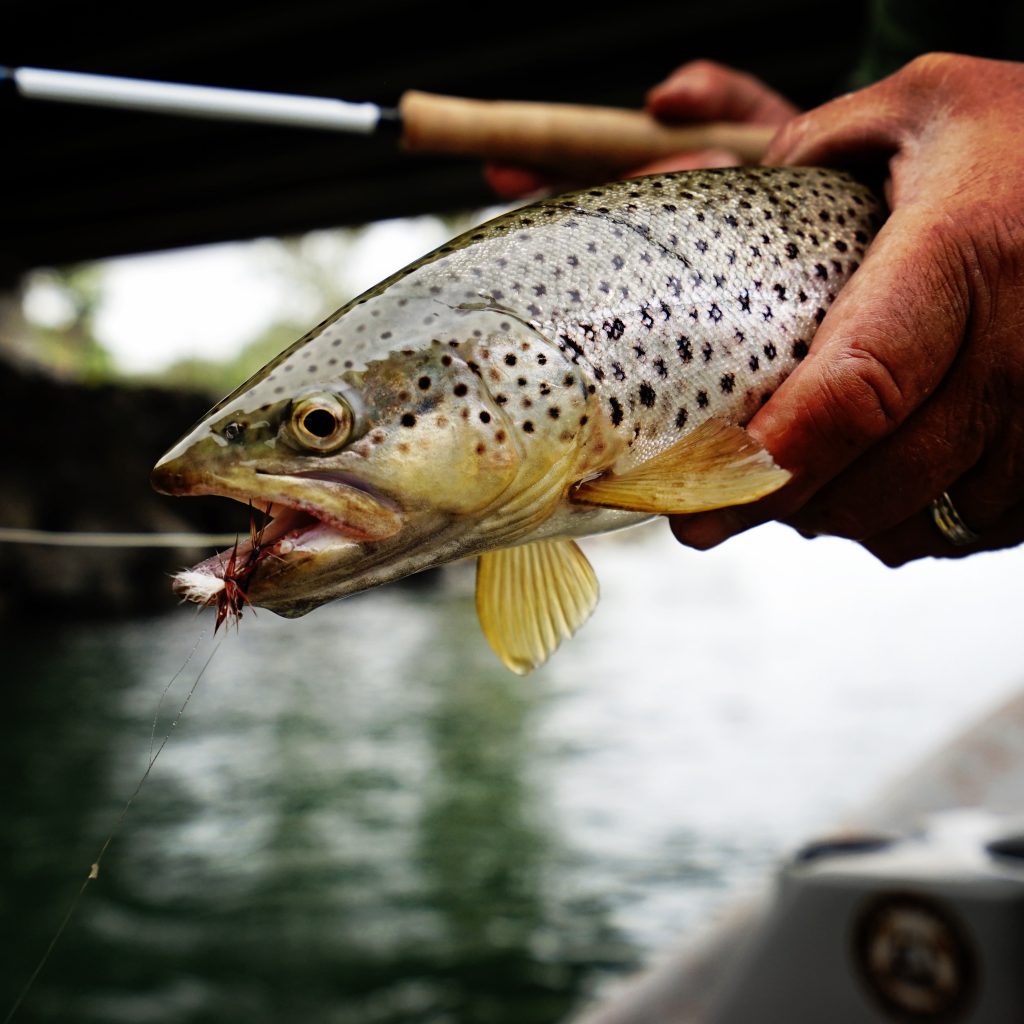 This has given Drift Boat Anglers another two full day floating options starting in N.W. Calgary and taking out at the Calgary Zoo,or floating from the Zoo and taking out at Glenmore Trail.Floaters can also continue going all the way to Fish Creek Provincial Park.The benefit for the Trout is that more spawning habitat has been opened up via the passage around the Irrigation Dam and although there was a fish ladder for the trout to navigate the Dam,it was often clogged with debris making it difficult for pre spawning Bow River Brown Trout to navigate, thats now  changed with the passage. 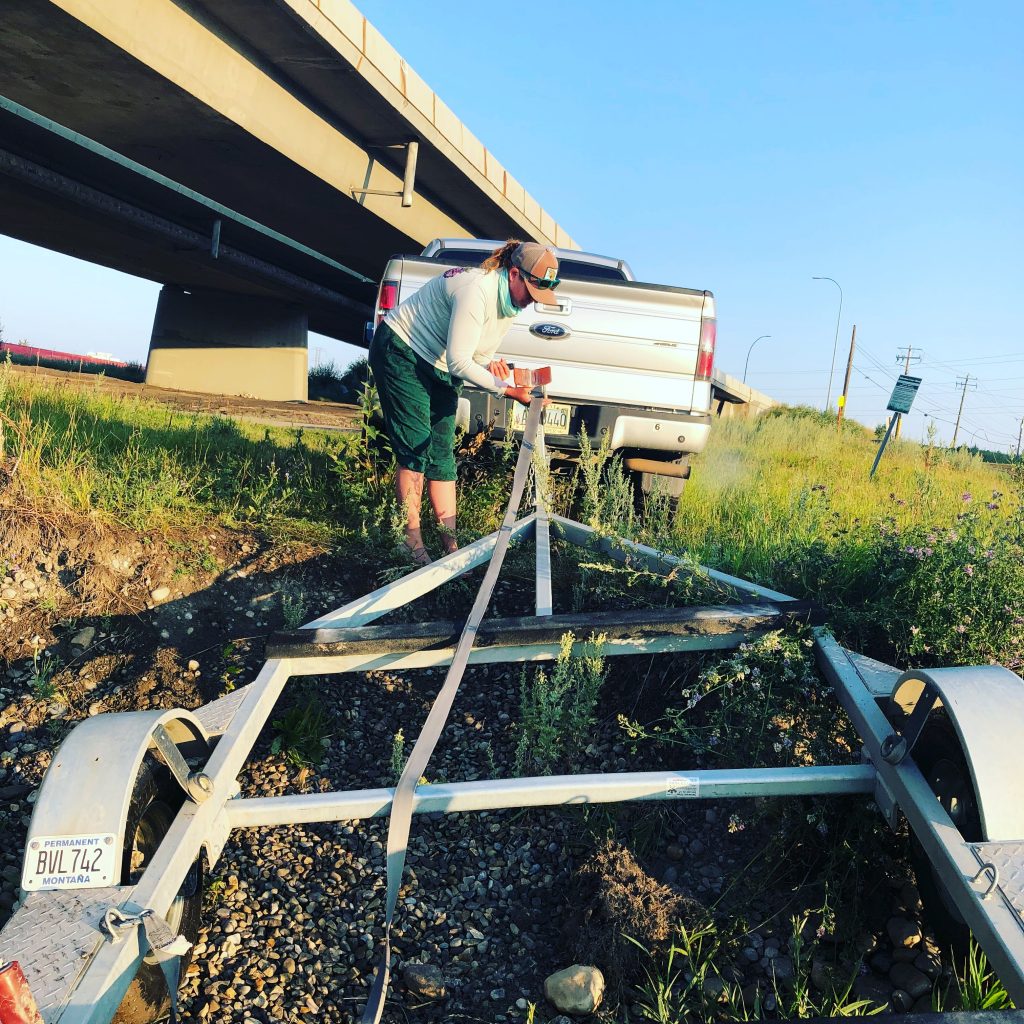 This has been a long overdue game changer for The Calgary Fly-Fishing Scene.Although fishing can be tough it has taken some pressure off the more popular lower Bow River and given Anglers an alternative  if Bow River tributaries are pumping dirty water namely The Elbow River as a good portion of this float is above it. 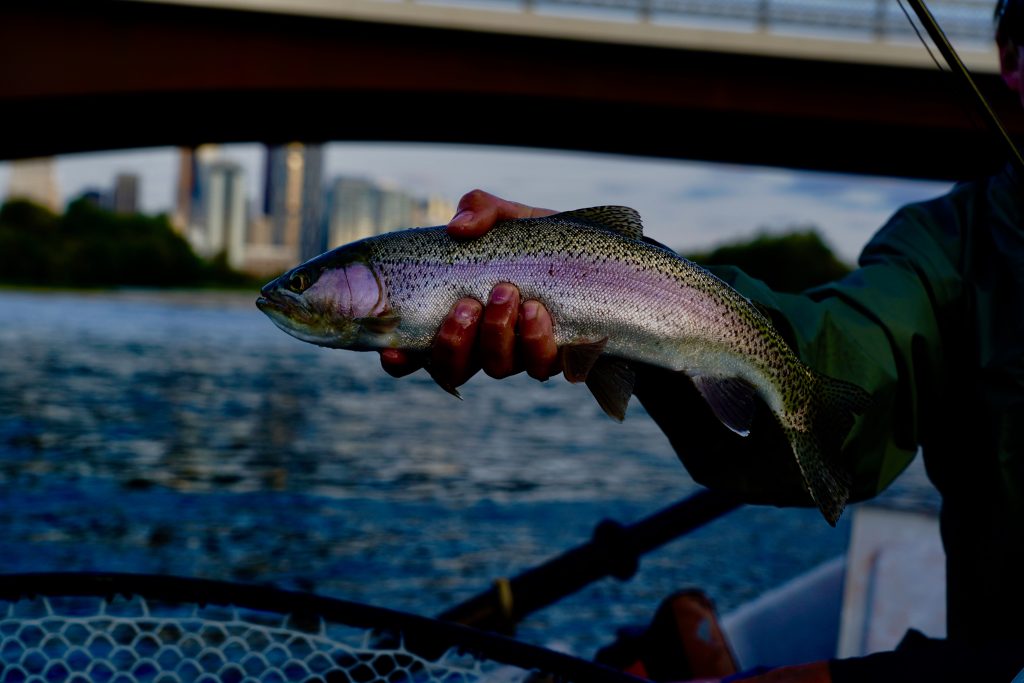 When I first moved to Calgary I always fished in the City as it was easy to access,close to home and with the time restraints I was dealing with I could easily fish for a few hours and call it good.My usual beat was below The Ogden Railway Yard down to the Calf Robe Bridge.I would start off fishing streamers swinging them “down and across” while wading and if a hatch materialized I would switch to Dry Flies. 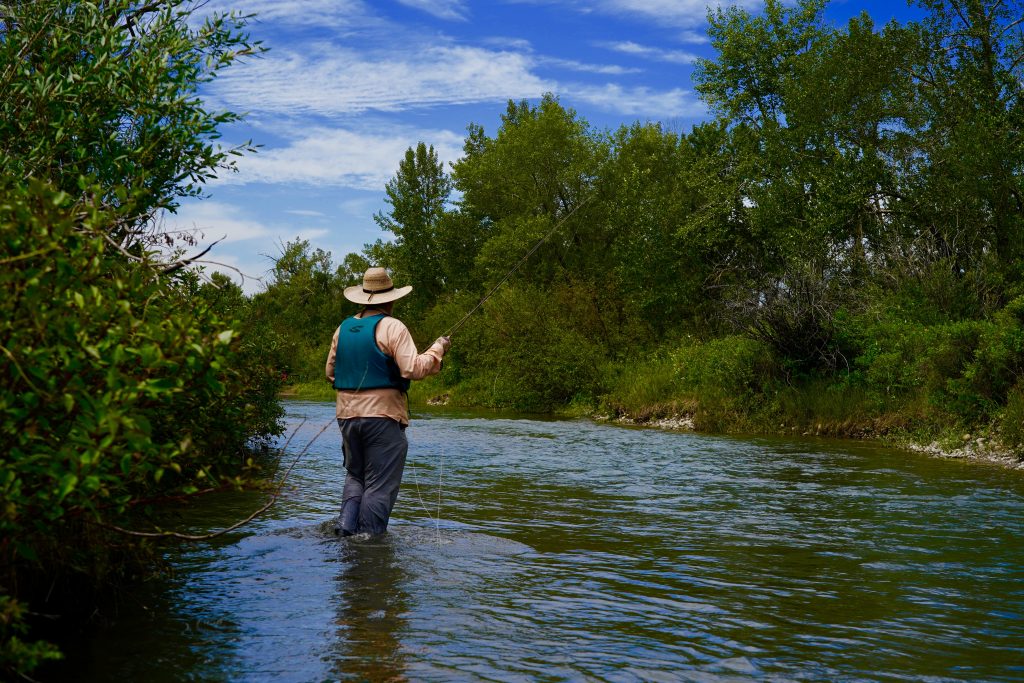 These Fly-Fishing “quickies” helped develop my current love affair with this part of the river.As my guiding career progressed this area became my proving grounds on new files or tactics I was experimenting with.Now on my days off I’m quick to rekindle this relationship and float it.This stretch can be noisy and sometimes the Tubers can be a little distracting however The Bow River has a different character compared to further down river.It’s more “bouncy” due to the gradient, there are lots of rip rap banks, gravel bars  and Islands with side Channels making for some very interesting and “fishy” water.There are also fewer Drift  Boats and Jet Boats are not allowed. 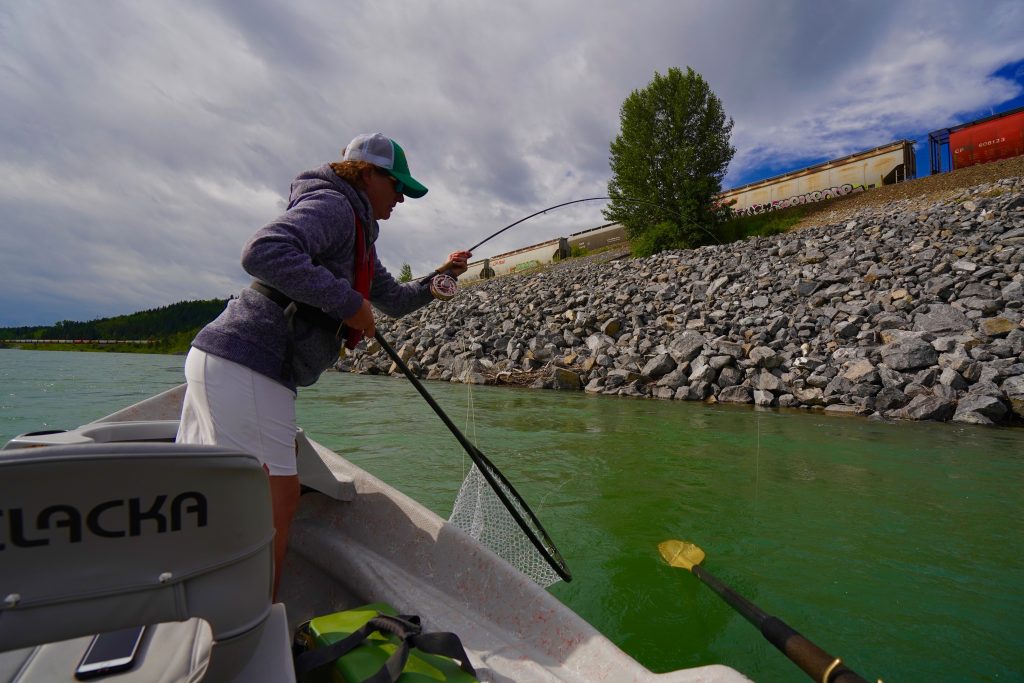 Given the nature of the River it’s not conducive to Nymph rides,It’s a Streamer or foam Dry Fly game, with Streamer fishing being the most effective.The fish population is not as dense as The lower Bow River consisting of mostly Brown Trout  with a few Rainbows thrown in,when its on you can get into plenty of 14-16 inch Browns with some tanks to keep you on your game.When its off, its off. 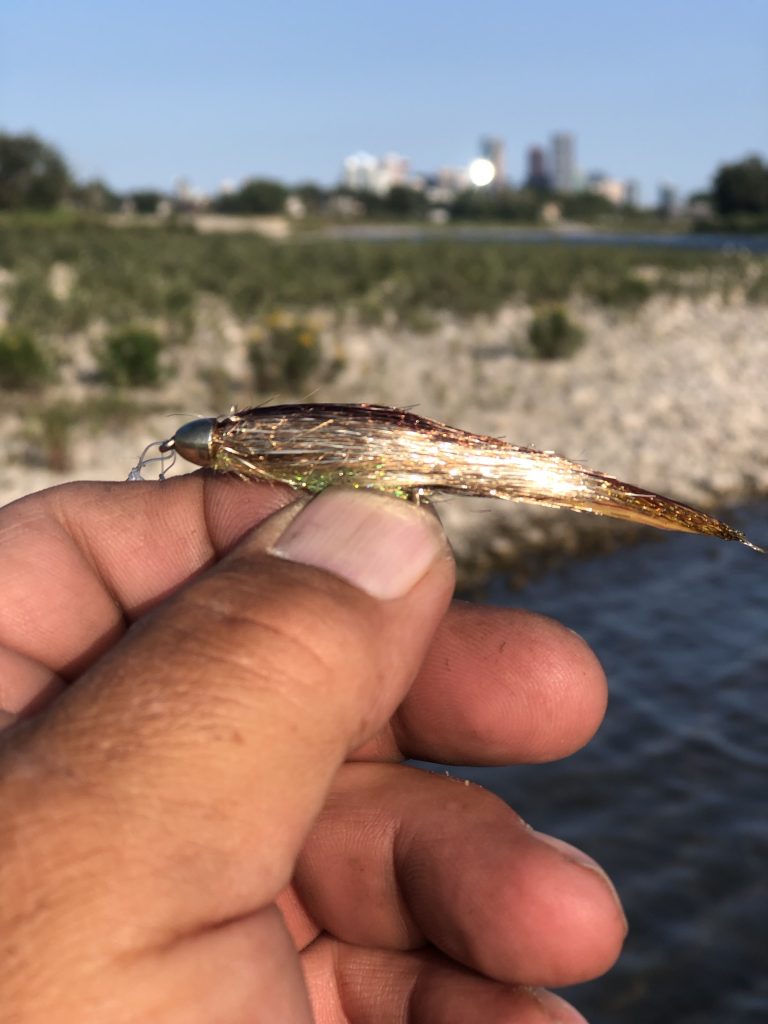 Coffee Minnows and other big Streamer Patterns get it done

Myself and my Calgary Fly-Fishing Guide Friends love it.On days off its our go-to as we can be on it early in the AM then off in the early afternoon allowing us to get it together for Bow River Guide Trips the the next day.There is also something to be said about catching trout as you float thru the downtown core of a City of over 1 million people! A very unique experience and a testament to the water quality of the Bow River. 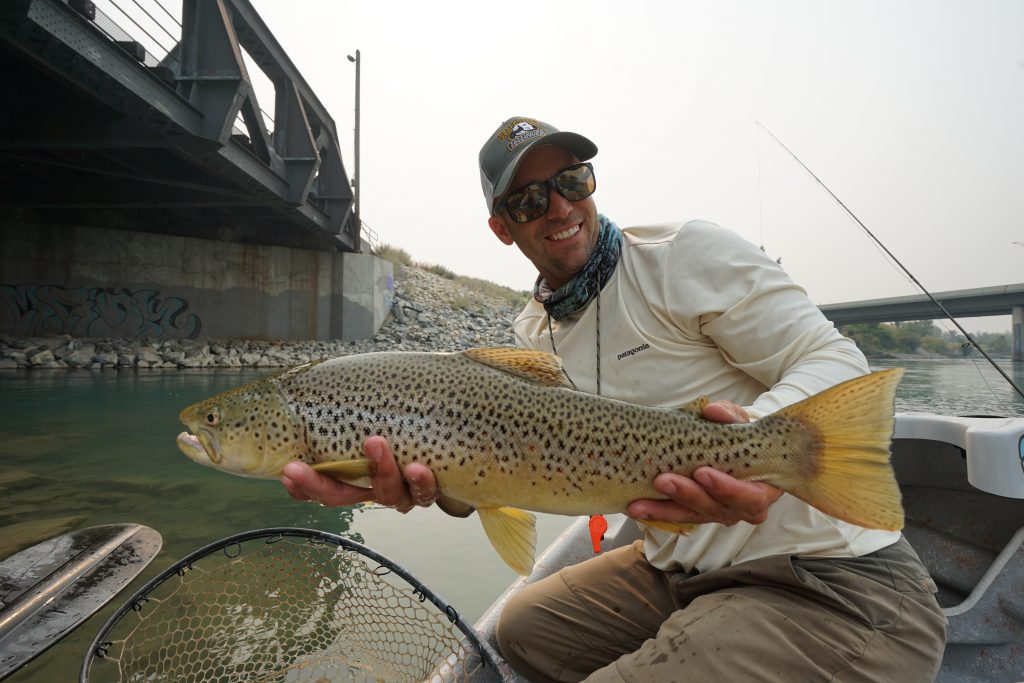 When the stars align and various Mayflies and/or Caddis hatch you can also find yourself throwing Dry Flies to rising Trout or fishing foam Hopper or Stonefly Patterns from the Boat when thats going on.For Visitors to Calgary that may not have the time for a Guided Float Trip on the Lower Bow River, this stretch is worth considering as the travel time to the river is a lot quicker than driving out of the Calgary City Limits. 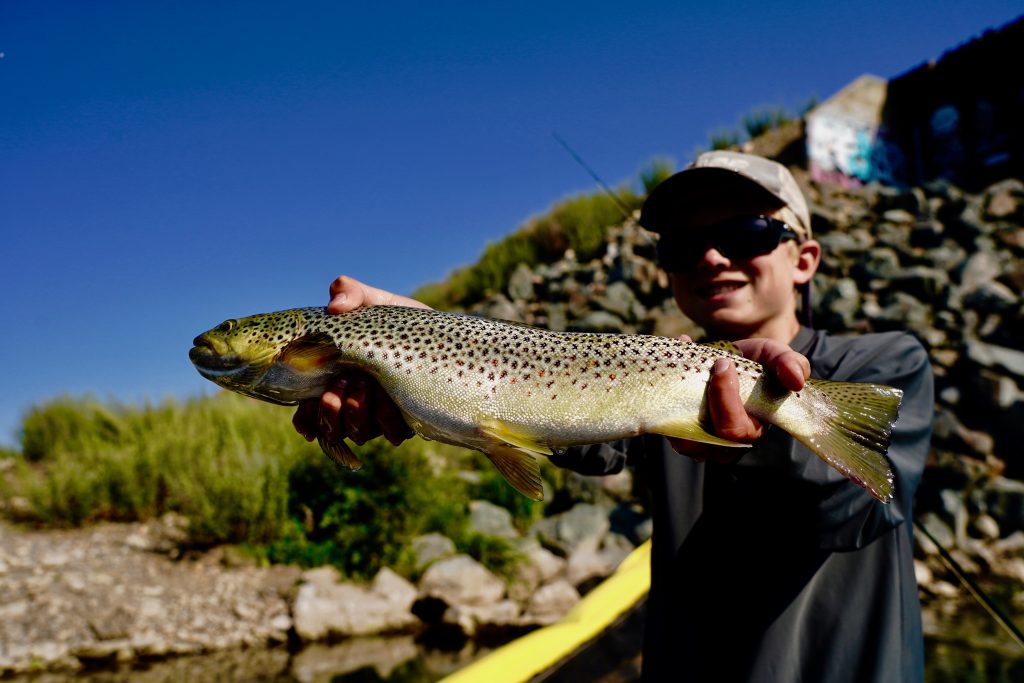 The Omaha Kid and a Hopper eating City Brown Trout

Some of our Bow River Fly-Fishing Clients have now tacked on an extra day just to get a taste of the City Stretch.Their fingers are crossed on every cast hoping for the chase  and an eat from a trophy Bow River Brown Trout. 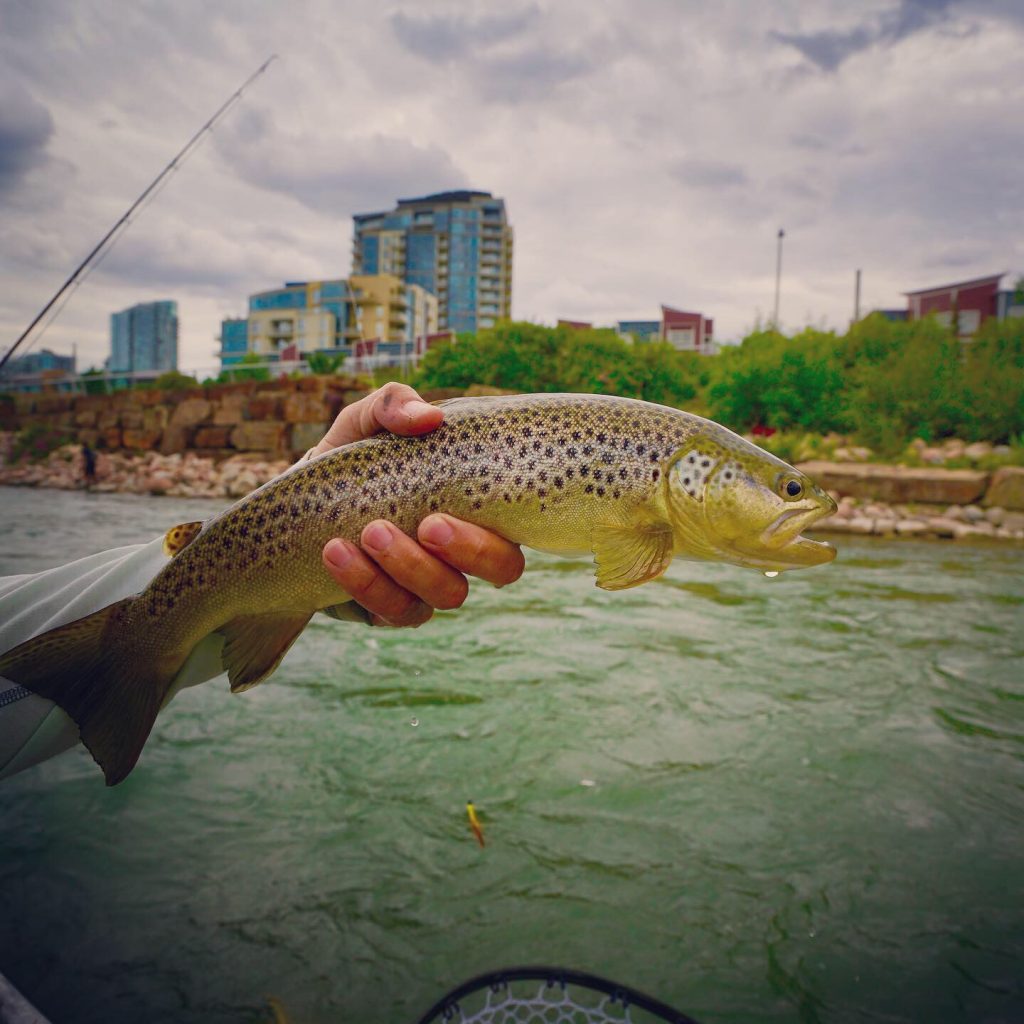 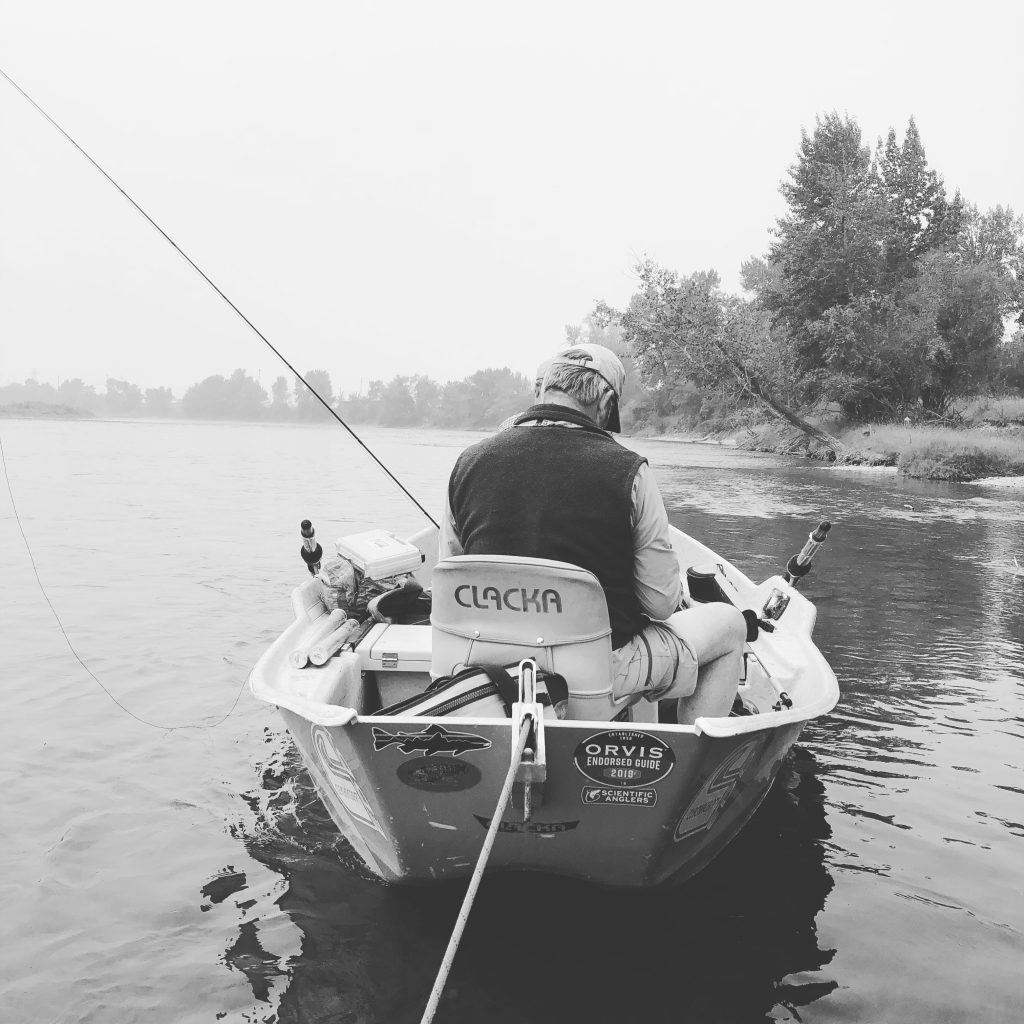 Reed with his first ever wild bird #birdhunting #p

Kate Sticks a Pheasant ….somewhere in Montana #b

Buddy sticks a pheasant then shows off bonus is th

Crossing back into Montana from Saskatchewan a cov

Crush -Mouse Puppies are starting to get at it.Bot

Millie pointing a Pheasant …which won.#montanabi

Crush getting mean on a Pheasant #montanabirdhunti

Big Preston traveled up from Texas with a friend t

More and more Waterfowl poor into the area as temp